The famous Museum of Modern Art (MoMA) in New York has won a preliminary injunction in federal court against small teahouse for what it was described as the deliberate use of a similar name and logo in order to confuse the public.

The Lower East Side establishment was forced to change its name from MoMaCha to MaMaCha and has posted a disclaimer noting that they are not affiliated with the MoMA.

Museum lawyers alleged that the tea store used a similar name for the museum, which is widely known to the public, used same typography and graphic elements in order to create confusion with the consumers and associate the business with the prestigious New York institution.

According to the lawyers, the shop's logo was “mimicking the signs and branding of the museum, which has been known as MoMA for nearly fifty years and used its custom “MoMA Gothic” font since 2003”, intentionally misleading people into believing they were affiliated with the museum.

The shop owners argued that “the MoMA’s marks are nothing more than four letters written in black and white, the colors ordinarily used to convey written words, in a font that is nearly identical to the widely available and commonly used Franklin Gothic font.”

But their arguments did not convince a federal judge, who sided with the museum commenting about MoMA's strong brand recognition.

“It is more likely than not that MOMACHA intentionally copied the Museum’s mark in bad faith when it adopted its old logo,” the judge concluded. 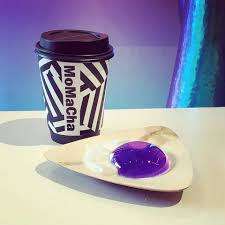 It is likely that the teahouse is also benefiting from the controversy. In its landing page, there is a phone number for media inquiries.

MOMACHA's trademark infringement is not a laughing matter. The owners can be forced to pay MoMA's legal costs and a statutory compensation of $50,000 per violation.

A good and ethical trademark attorney will advise you not to step into other's intellectual property, not even for the sake of publicity.

Naming your business and designing a logo and other graphic elements are important. Consult with a trademark attorney to verify that your investment will not be costly challenged. You need to maintain a long-term relationship with an attorney that is knowledgeable and can ethically advise you of the risks you run as your business strategies change. A good professional can guide you properly to minimize the chances that you will be stepping in other people's property.

Business and trademark attorney Marcos E. Garciaacosta can help you navigate these legal issues with confidence, not only in the United States of America but globally.